Twins in School: Should My Twins Be in the Same Class? 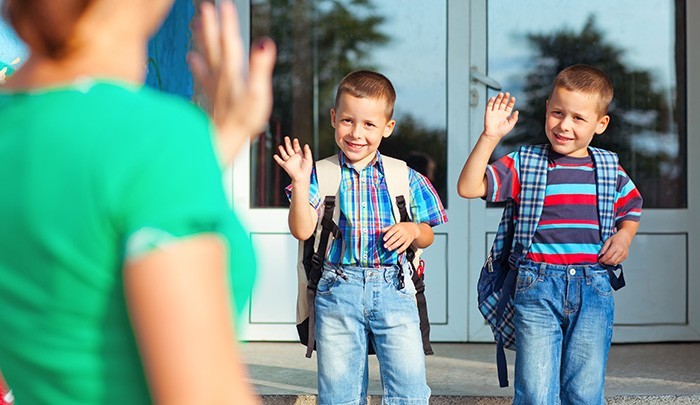 As a mother of nine-year-old fraternal girl twins, I have found my association in both the local chapter and the regional chapters of a mother of twins’ group to be invaluable.

One of the themes that I consistently hear repeated is “Should we seperate twins in school or not?” A really interesting question from an educational psychology perspective. The issue of twins at school is an ongoing one. Let’s dive into this issue:

Should Twins be Separated in School?

Coming from the perspective of both a mother and a former elementary school teacher, I respond, “There is no simple answer. It depends upon the children and the school situation.” I think this decision is an individual one that must be made after evaluating several questions including:

In the decisions I have made about my girls placement I have considered and weighed the responses to each of these questions each school year. I would like to tell you my experiences in hopes that they will both answer questions and raise new questions.

When my girls began pre-school I requested (okay, close to demanded before I wrote out the first check) that they stay together. I had been working outside of the house since the girls were 5 weeks old, but had previously left them with first a nanny and then in a home daycare environment. This was there first pre-school experience, and even though they weren’t nervous, I was. I felt the adjustment would be easier for them if they stayed together. And, somewhat selfishly, I felt more at ease knowing they would be together and looking out for each other.

When it came time to enroll them in kindergarten, everyone in our family was looking forward to separate classrooms. My girls are quite different both in physical appearance and temperament. They were ready for time apart, and the transition into separate classrooms came easily. They both made new friends and flourished.

Before the start of first grade, I observed the different first grade classrooms, spoke to parents for input, and decided to not only keep the girls separated, but went one step further by selecting which teacher I thought would be best for each girl based upon the girls’ abilities and temperaments. Prior to the end of kindergarten I wrote a letter to the principal stating the reasons for my preferences.

At the start of first grade I was pleased to learn my requests had been granted. Again, both girls flourished in their separate environments. But, there was one factor I had not considered. At this stage, both of my girls were academically advanced. For whatever reasons the school administration decided to take a group of six of the most advanced first graders and put them all in the same classroom. One of my daughters was part of this group. The other one would have been as well, but was not in this classroom because she was a “twin”. Throughout the year the girls were constantly comparing activities, and I was constantly shielding questions such as “why are her spelling words harder” and “why does she get to learn that.”

Prior to the start of second grade I spoke to the principal about classroom placements for second grade. To complicate matters, our school was converting to a year-round schedule. We live in an area of Southern California that is rapidly expanding. Because of overcrowding, a year round schedule was being implemented, allowing for two classrooms of each grade per track. So, with only two classrooms to choose from, my choice was narrowed down to “together or not!”

I voiced my concern that one of my daughters not be left behind academically just because she was a twin. I stated that in the best of worlds, I wanted them separated, but if this core academic group were kept together in second grade, I would request that both girls be in the same classroom. I was assured that the grouping would be dispersed between the two classrooms and that the girls would be separated.

And, here comes, rule #1: Know who does what, when you place a request with your school administration. Although I spoke with the principal, it was the vice-principal who made up the class list.

And, rule #2: Place your request in writing!

And, rule #3: Understand requests are just that. There is no guarantee that your request will always be accommodated.

At the start of second grade, my husband and I took the girls to school, only to view the class list to find they were in the same classroom. As I viewed the list, I realized that the core group, as well as some other academically advanced students from the other first grade class, had all been kept together and reasoned that was why the girls were together.

Surprise! As I took them to meet the teacher she announced, “R” will not be in my class. I have had her moved to the other classroom because our policy is not to have twins together”. I took my daughter to the other class, but knew I was not done with this issue. I remembered a workshop I had attended at a twin convention on this very subject. I can only speak for California, but I would venture to say that this would apply to other states as well. In the workshop, the presenter informed us that even if a school states a particular policy regarding twin placements, there are no laws or written policies. If you are presented with this statement, ask to see the policy in writing.

Knowing something about school dynamics, I decided to wait a few weeks to see how the girls were doing in their classrooms before approaching first the teachers and then the administration. It quickly became evident that their curriculum varied greatly. I spoke with “R”‘s teacher. I assured her that it was not personal, but that I was concerned about the differences in the two curriculums. Having had time to assess the children she said that she was facing a dilemma because she would either have to put my daughter in her own reading group or place her with children who were not yet at her reading level, which could slow down her progress.

At that point, both the teacher and I approached the principal. When he looked into the matter, we all agreed that it would be best to place “R” back in her sister’s class. The principal then approached the other teacher about keeping the girls together.

At the first parent conference, the teacher said to me “this is working out much better than I had expected. There is no problem with them being together. They are so different that nobody would even know they were twins!” By the end of second grade the teacher even suggested that the girls be kept together in third grade.

The transition to third grade was smooth as both girls entered the same class and did well. At the end of third grade, I had a conversation with the vice-principal. I reiterated that if the children were grouped academically, that I did not want the girls separated solely based on the decision that they were twins.

As we are in a year-round setting, the girls recently started fourth grade. My girls have been placed in the same class even though the school has dispersed the fourth graders between the classes regardless of their academic levels.

During my initial meeting with their fourth grade teacher she stated “I don’t know what your reasons are for keeping the girls together, but at some point you may want to have them in separate classrooms.” I quickly recited the “Reader’s Digest version” of “why”. And, it may very well be that the girls will be separated next year. As that time approaches I will weigh the different factors and make that decision.

After speaking with so many parents of multiples, I can say that many of us have faced the same decisions. I think it is helpful to keep an open mind on this issue. Understand that you may not be able to make long-term decisions about the separation issue because the variables change with each new encounter. Know that you can approach the school staff with your input. And, for those of you with greater multiples, realize that the decisions are even more mathematically complex!

What do you think about twins at school? Are you for or against separation? Let us know in the comments below.

Facebook
Twitter
Pinterest
Previous articleWhat are the Ideal Weights For My Twin Babies During the Pregnancy?
Next articleCan Twins Share A Crib? Co-Sleeping Explored
TwinStuff
TwinStuff.com is the #1 Interweb Resource and continually growing Interactive Community for Parents of Twins and Multiples. Twinstuff.com began in 1998 as a forum for discussion on all things twins. Over the years, it has grown substantially and evolved into the ultimate resource and engaged community for twins, multiples and parents of twin & multiples.

Whether to Separate the Twins in School and When

First, apparently I have a blog here. I know you couldn't tell based on recent inactivity. D'oh. I offer no excuses (because you twin...
Read more