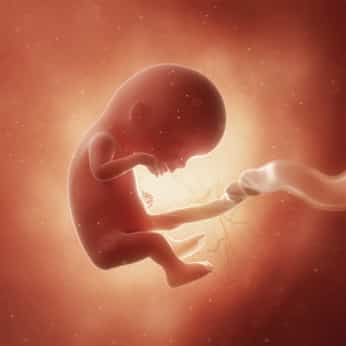 You’re 12 weeks pregnant with twins. You’ve hit the last week of the first trimester. That means from here, things get easier. (For a while, at least!)

You can expect all those horrendous symptoms to start slowing down and dropping off as you get through the next couple of weeks, and you might even see an increase in your energy levels.

But your babies are also growing incredibly fast. So read on to find out what’s going to happen this week, and what to expect.

A single fetus at 12 weeks

Your Twin Babies at 12 Weeks Pregnant

Your babies are about the size of a plum right now. They’re around two inches long, and weigh around half an ounce. Incredibly, your baby has doubled in size in just three weeks, which is amazing!

At 12 weeks, your babies should have finished developing all of their internal organs, making them perfectly complete little people. Which means that now, all they need to do is keep on growing as fast as they can.

Week 12 is normally around where your babies digestive system starts working. It won’t have anything to process, but the muscles that make up their tummy and intestines start to flex and contract. A perfectly normal autonomous reaction that we all do without thinking, that sends our digesting food through our bodies.

Because they’ve got bones now, your baby is also starting to produce their own white blood cells, ready to keep their immune system strong.

The biggest thing that’s going to happen this week though? Independent nervous systems start to kick in, and your babies will develop their own sets of reflexes. They actually start to move in response to outside influences, like you poking yourself in the tummy. You’re still not going to be able to feel it yet, though.

If you’ve been suffering from heavy symptoms, there’s good news. All the morning sickness and fatigue that’s been plaguing should start calming down right now.

Of course, they’re going to be replaced with other issues, but that’s something we can deal with when we get to it

A baby at 12 weeks is basically fully developed, and now just has to grow. That means if you have an ultrasound, they’re going to look recognisably like a person.

It’s possible that you could tell whether you’re having a boy or girl this early on, but it’s unlikely. You’re probably going to have to wait another few weeks, for example, at your mid pregnancy scan at week 20.

Are You 12 Weeks Pregnant with Twins?

You’ve made it through about one third of your pregnancy journey with twins. It might seem like just yesterday that you found out you were pregnant. But there’s only more exciting things to come!

If you’ve got any words of advice or encouragement for our expectant moms, or if you have any questions, let us know in our comments. We love hearing from all our readers, no matter what you’ve got to say. How do you feel at 12 weeks pregnant with twins?

You're 11 weeks pregnant with twins! You've made it through the rough patch. Pretty soon, everything's going to start getting so much better. Your morning...
Read more
First Trimester

Ten weeks in and wondering what to expect? Week ten is where it's normal for women to start showing. Of course, considering you're probably having...
Read more
First Trimester

You're nine weeks pregnant with twins. Nine weeks in, and probably starting to put on a little bit of weight. That's completely normal, and something...
Read more