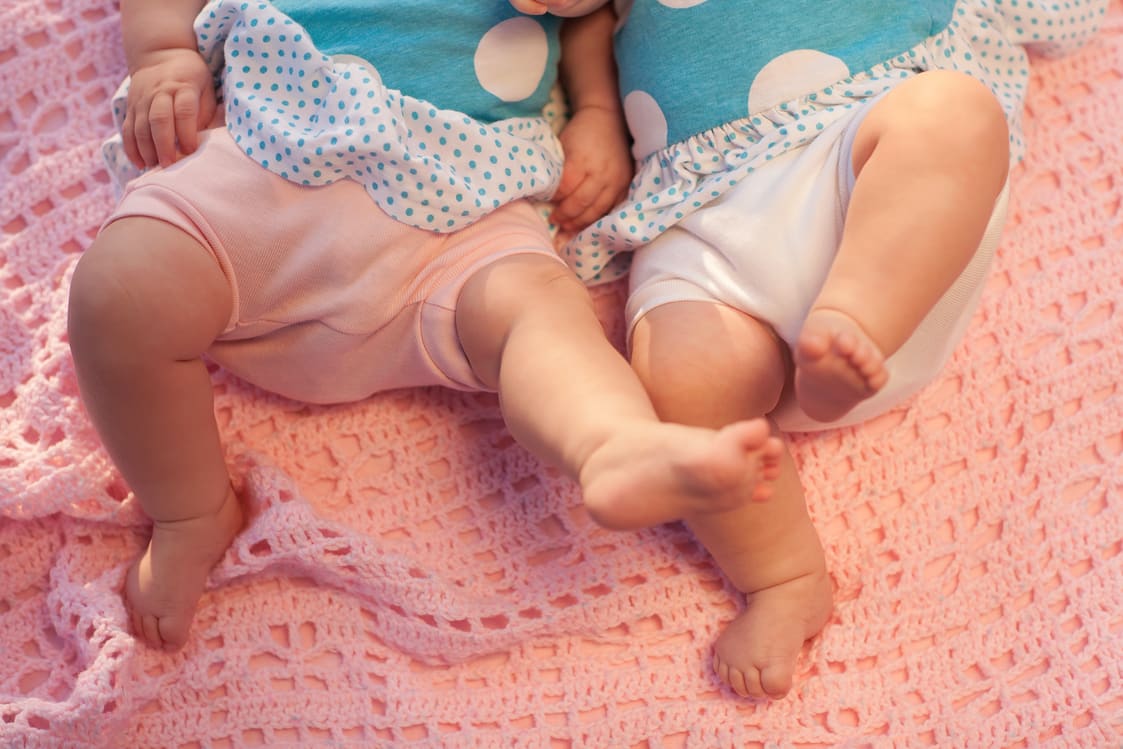 The events leading up to the arrival of my twin daughters was exciting, overwhelming, and amazing! In October 2010, my husband and I found out that I was four weeks pregnant! The following week, I was rocking the belly band with every ensemble. At the seven-week mark, I found out that I was having twins! I was not the beautiful pregnant woman that you would see images of, modeling maternity clothes. I resembled more of a pregnant hot mess.Here is a snapshot of what life was like for me, a stay at home mom of twins.  I will share with you the highs and lows, starting with the newborn stage and ending at the one-year mark. In preparation for becoming a twin mom, I mention the items that I used as a twin parent, along with other twin baby essentials that would have been extremely helpful as a twin mama.

The girls finished their bottles and it was time to carry them back upstairs, to their nursery. I changed each of their diapers, swaddled them, and laid them back down into each of their cribs. I wrote down how much they drank and when they were last changed, onto a whiteboard that I had hung up on the nursery door. This way, when my husband came home from work, he would take the 4 a.m. feeding and changing, allowing me to rest until 6 a.m.

Wished for Items: A small refrigerator and portable bottle warmer. If I had these items upstairs, they would have saved me time from going up and down the stairs.

After waking up and checking the baby monitor; I slathered on my belly butter and changed into my comfy maternity clothes. I put on my postpartum belly wrap and met my husband downstairs. We prepped the bottles, popped in a DVD, and went upstairs to get the girls.

Diapers were changed and the girls were dressed in their adorable onesies. My husband and I bottle fed our daughters, then he went off to bed. After their feedings, it was time for me to clean and eat breakfast. One by one, I placed the girls in their soft and soothing stationary baby swings.

I took their cloth bibs and tossed them in to the hamper, to be washed with additional cloth bibs and plenty of burp cloths. Heading into the kitchen, I would then clean and sanitize each of their bottles and the rubber nipples. Peaking over at the twins, they would be snoozing away in their swings.

The twins were old enough to keep their heads up by themselves! After prepping their lunch, I would attempt to pick one of the twins up, but she would crawl away. It became a game of chase, all within the confines of our fortress of gates. About 15 minutes later, I would have both girls strapped into their high chairs. Both girls had long bibs, to catch anything that may not have made it into their mouths.

Wished for Item: Two portable booster seats would have been perfect for the times we ate out. At that time, booster seats or highchairs were sticky and gross.

After lunch, it was time to clean. An afternoon bath time was a must, and occasionally happened throughout the week. When the twins were not as messy, wipes were an alternative way of cleaning up both girls. Since they were old enough to sit up by themselves, bath time moved faster than the newborn stage.

Both girls were cleaned up and laying down for their afternoon naps. During their nap times, I would catch up on cleaning around the house and attempted to take a quick shower. They slept about one to two hours before they woke up.

Mother of Twins: from 9 months to 12 months

The twins were pushing themselves up to stand and look out the kitchen window while I put together their afternoon snack. They enjoyed eating their treats out of their snack catchers. Our cats enjoyed following the twins around, as they waited to pounce on any treats that fell on the floor.

Between multiple diaper changings and loads of laundry, it was time for dinner. My husband would leave for work, and it was back to me being outnumbered by the twins. While one girl was safely played in the center of the octagon gates, as I carried the other one up stairs and placed her in her crib. Then, shuffling back downstairs to get my other daughter and carrying her upstairs to get both twins bathed. They enjoyed bath time because they loved playing with the bubbles and their toys.

The twins were dressed in their pajamas and ready for bed. I let the girls play, as I hung up their bath towels and rang out the bath water from their washcloths. To calm them down, I kept them on a consistent set of routines and sleep schedule. I read their favorite book, tucked them in with their personalized blankets, turned on their nightlight and sound sleeper, and sang their favorite songs. I kissed them goodnight, and my one-year old twins would fall fast asleep.

Through the highs and lows of a day in the life of a mom with twins; as cliché as it sounds, it is so worth it. The smiles on my daughters’ faces would make tough times easier to handle. When I doubted myself, I wish I would have known of an online, inner circle, of other twin moms to chat with. Some days I felt alone and lost. Thankfully, TwinStuff has an online TwinStuff Facebook Group for parents of twins and multiples to come together and offer support.  Surround yourself with a strong twin community and never be afraid to ask for help.

Did you receive an invitation to attend a special baby shower, but unsure of what gift to give the expectant parents of newborn twins?...
Read more