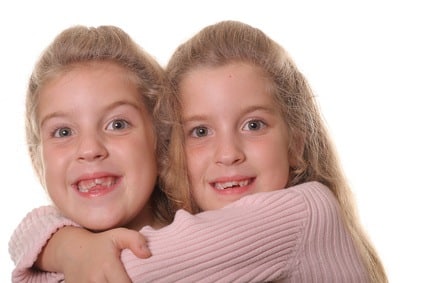 When your doctor told you you were having identical twins, your heart leapt. Then, when they both came out, twin bundles of light and joy, you instantly fell in love. And they really were identical, down to their tiny little toes.

But as they got a little older, they started to look different. These differences only got more accentuated as they got older.

So you started to question things. Started to ask yourself, is this normal? Can identical twins look different? After all, aren’t they supposed to look identical?! 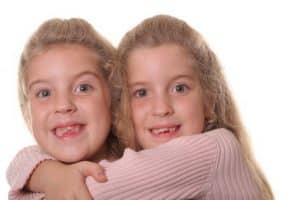 As it turns out, identical twins can look different from each other. Even really different, despite being identical.

Well, there’s actually a surprising amount of ways this can happen.

The first one is down to our genetic make up, the vagaries of how DNA works, and how it affects how we look and how we act.

See, identical twins come from the same egg, which splits in two early in the pregnancy. This means that your twins will start with exactly the same DNA.

As your twins mature in your womb, their DNA will change slightly. This can cause minor changes in how your twins look, for example freckles and birthmarks, slight differences in hair color, skin tone, etc.

Normally, this DNA change is relatively minor, and won’t affect anything except minor cosmetic differences. However, sometimes pure chance means that your twins suffer minor mutations which change things you really can see. For example, eye color, hair color, or sometimes even a completely different skin color!

But why does this happen? Well, when a baby is first conceived, it’s made up of a single sperm and egg cell that merge to form a fertilized embryo. This divides itself hundreds of thousands of times, and in the process creates a fully formed human child. It’s literally incredible, when you think about it.

However, when you have twins, this embryo splits early on in this process. Anywhere between the second to the sixth day. Once they’re separated, both embryos then keep splitting. But every time cells split, there’s a tiny little chance that the DNA of the end result is slightly different to the DNA that it came from.

This is mutation, and it’s completely natural.

But what this means is that your twins have a chance of developing differently, depending on how and when these tiny little changes happen.

This is also the reason you can have two twins who might look identical, but act completely differently. A whole lot of our preferences, from the food we like to eat, to whether we’re introverted or extroverted, or even whether we’re a morning person or night owl, is determined primarily through our genetics.

Unlike with the body, tiny little changes in our brains lead to enormous differences in personality, so these tiny deviations can make all the difference.

The second happens in womb, where a different amount of blood flow between both twins, something that can happen often and is incredibly difficult to pick up if it’s subtle enough, can nourish one twin slightly more than the other, and leave them permanently taller and heavier than their sibling.

So if you’ve ever asked yourself how can identical twins be different heights, there’s your answer.

There’s also the possibility that your identical twins can have differences in which X chromosome they get from their parents. This can lead to strange situations like one twin being color blind and the other not.

Finally, there’s mirror twins, which are a pretty rare and incredibly strange case. It’s now believed by geneticists that the way our bodies develop, including things like which hand we use, are set in the first few days after conception.

If the embryo splits before this, it’s possible, due to random chance again, that both embryos decide to choose different sides, leading to twins that look almost identical, but as if they’re the mirror images of each other.

We’ve got an article that explains mirror twins, but the cliff notes version is that both twins will be opposite, including things like which hand they favor, which was their hair parts, and even things like having internal organs on different sides of their bodies!

So, can identical twins look different?

Yes, so if you’re having twins, don’t be worried if they end up looking or acting a little different. Like we’ve just explained, it’s completely normal, something that happens very often, and something that you might even end up appreciating.

After all, it can be hard enough to tell identical twins apart sometimes, so little differences can actually be a great help!

How identical are your twins? Do they have any little differences or idiosyncrasies that make you melt and you’d love to share. We want to hear your stories, so let us know in the comments and feel free to join our online community.

Facebook
Twitter
Pinterest
Previous articleBest Baby Food Maker of 2018
Next articleMorning Sickness with Twins: What to Expect
TwinStuff
TwinStuff.com is the #1 Interweb Resource and continually growing Interactive Community for Parents of Twins and Multiples. Twinstuff.com began in 1998 as a forum for discussion on all things twins. Over the years, it has grown substantially and evolved into the ultimate resource and engaged community for twins, multiples and parents of twin & multiples.