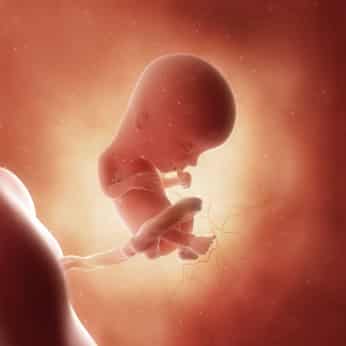 13 weeks pregnant with twins already! It’s amazing that we’ve come so far, and we’re already in the second trimester. Hopefully you’re doing well, and the first trimester didn’t hit you that hard.

Thankfully, things are going to be looking up for the next few weeks. You’re a third of the way through your pregnancy, so lets find out what’s happening with your babies right now. A single fetus at 13 weeks

Your Twin Babies at 13 Weeks Pregnant

This far along, your babies are growing fast. A singleton would be around the size of a lemon or nectarine right now, almost 3 inches long and close to an ounce in weight. Generally around 0.8 ounces.

Twins are normally a little smaller than that, but not by much. And that doesn’t change the fact that they’re going to be pretty much fully developed now in terms of internal organs, facial features, and even hair and teeth!

In terms of size, there’s another major thing that’s happened. Their head is now only a third of their body by size, rather than the half and half that it was a week or two ago.

Incredibly, your babies also have fingerprints by now! And because you’re having twins, they’re going to have different fingerprints, too! This is because our fingerprints are mostly determined by our fingers being pressed against the interior wall of the uterus when they’re still soft and tiny.

With all the increased mobility, your babies are able to touch their own faces now, and if they’re in the same sac, each other. You might see your babies putting their thumbs in their mouths now.

This week is also the week where your baby starts to grow their vocal chords, that first step towards crying all night. And telling you they love you.

The second trimester is supposedly the easiest of the three, so you’ve got good things coming. Hopefully, the worst of the first trimester symptoms have faded, and you’re left feeling pretty good.

That’s not to say that the second trimester doesn’t come with its own challenges. But that they’re going to pale in comparison compared to what you’ve already dealt with. You’ve got this, girls!

Twins are normally visible at the 12th or 13th week scan, but the sex of your babies might not be. Whilst it’s possible that you can tell the sex of a fetus at this age, it’s unlikely, so you’re probably going to have to wait until around the 20th week.

So if you’re itching to find out what you’re having, we’re sorry. You’re gonna have to wait a little bit longer.

You’re probably going to start feeling pretty great soon, especially compared to how you have felt the last few weeks. So make sure you take advantage of it, and get as much done as you can!

If they haven’t already, your veins will soon be under a lot of extra pressure. To avoid and minimize varicose veins and swelling in the ankles and feet, it’s a great idea to wear compression socks. And don’t worry, they don’t all look terrible. These look nice and come highly recommended.

Why not set up your Baby Registry?

[thrive_text_block color=”blue” headline=”‘Must Haves’ in Trimester 2 “]We asked the TwinStuff Community what their Must Have products were during the second Trimester:

Are You 13 Weeks Pregnant with Twins?

You’ve probably had your first major scans by now, so you’ll have seen your babies and heard their heartbeats. Couple that with the increase in energy and lack of horrific symptoms, and you should be feeling pretty amazing right now.

So treat yourself, and enjoy the next few days. You’ve earned it. We’ll see you next week, where we’ll be going into the ‘honeymoon phase’ of your pregnancy. See you there! How do you feel at 13 weeks pregnant with twins?

25 weeks pregnant with twins means we're getting real close to the third trimester of your pregnancy. Before you get there, you should try and...
Read more
Second Trimester

24 weeks pregnant with twins, and your little twinnies are growing faster than ever. They're really packing on the weight, and because of that, on...
Read more