Newborn Twins Sleeping Arrangements: Which Is Safest For Your Precious Duo? 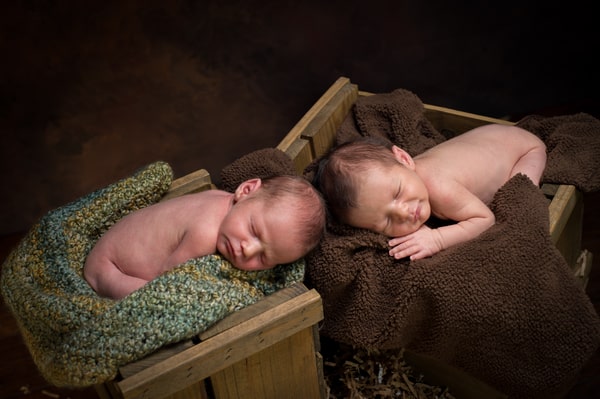 Where will they sleep? It’s one of the most important questions parents of twins need to answer before they bring their babies home. It’s also quite a thorny subject, given how not all newborn twins sleeping arrangements are recommended by doctors.

According to the American Academy of Paediatrics, about 3,500 babies die of sleep-related causes every year in the US. These sleep-related deaths include those caused by Sudden Infant Death Syndrome (SIDS), accidental strangulation, and accidental suffocation.

Cases of sleep-related infant deaths went down following the government’s safe sleep campaign in the 1990s, but they have mostly stayed the same in recent years.

Things to consider about twins sleeping together

First off, your twins’ sleeping arrangements will be largely determined by the restrictions posed by your home and your childcare situation.

If there’s not enough space in the nursery for two cribs, for instance, then you may have to go for a co-bedding arrangement. If you decide to exclusively breastfeed your babies, then you may find co-sleeping in twin bassinets to be the best option.

A couple of things you need to think about are:

If there isn’t enough space in your bedroom or in the nursery for separate cribs, keeping your babies in the same crib can be an option. You may also consider co-sleeping or buying bassinets instead of cribs.

Many parents opt to keep their newborn twins in the same crib at least until they’re about 6 months old. Unfortunately, this only works for babies who go to sleep and wake up at the same time. If your babies have different sleep patterns, they may disrupt each other’s sleep — as well as yours. Also sleep training your twins can be very good for having proper sleeping habits.

If you breastfeed your twins, having them in bed with you or in a co-sleeper beside your bed may be easiest, especially with nighttime feeds. If you decide to bottle feed, separate cribs are okay. You and your partner can schedule feeding duties and take turns getting up in the middle of the night to give the babies their bottles.

Each of these sleeping options has its own pros and cons. Some are recommended by pediatricians while some are not.

Some parents have their twins share a crib when they bring them home for the first time. Co-bedding is actually quite helpful during these first few weeks because it helps your newborns regulate their sleep cycles. It’s also soothing for the twins who were, after all, “wombmates” for months and are used to being so close to each other.

In the UK, the National Health Service says this sleeping arrangement for twins is perfectly safe. But when they are older and start wiggling about, it’s time to move them to separate cots so they don’t roll onto and wake up each other.

If you feel a bit iffy about putting your babies in the same crib, then it’s two cribs for you. Having space for two separate cribs also gives you the option of buying cots that can be converted into toddler beds and then regular beds.

Co-sleeping proponents maintain that many cultures have been sleeping family style for centuries and that many still do. It is said to have various benefits, including easier nighttime feedings for breastfeeding moms, better self-esteem and a sense of security for the children, and more sleep for everyone in the family.

However, some doctors say that co-sleeping can increase the risk of SIDS and creates future sleep problems for children. And with newborn twins, who are already at higher risk for SIDS than singletons, there’s concern that co-sleeping would only increase the likelihood of sleep-related accidents or even death.

If you’re going to do this, you have to take every precaution, including switching to a king-sized bed.

If you’d rather not keep your twins in one crib but space is an issue, you may go with having two bassinets. These have the added benefits of being portable, allowing you to move your twins from room to room with ease.

You’ll also be able to keep your newborn twins in your bedroom (as experts recommend) without having to co-sleep (if you’re not comfortable with it) or switching to a bigger bed. 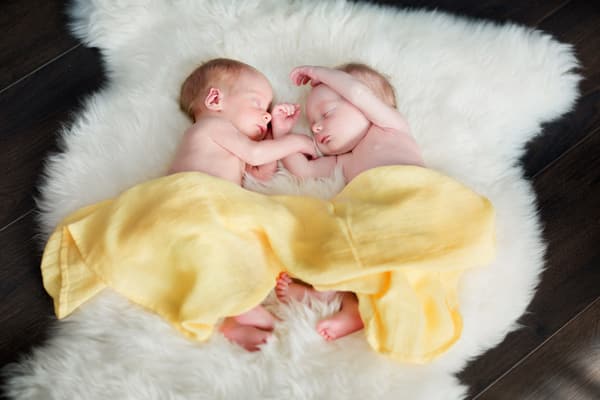 What is the safest sleeping arrangement for newborn twins?

Because it has been found to reduce the risk of crib death, both the UK’s National Health Service and the American Academy of Paediatrics in the US recommend keeping newborn twins in the same room as the parents at least for the first six months.

In 2009, the Royal College of Midwives recommended having twins sleep in the parents’ room for the first six months of life and suggested co-bedding as a way to make this possible.

Meanwhile, a study from Durham University found that co-bedding twins wasn’t any more dangerous than having twin babies under 3 months old sleep in separate cots. This study found that co-bedded twins didn’t wake up more frequently during the night, nor did they exhibit increased body temperature.

Co-bedding may also be better for twins in terms of health. Doctors have long noted that when placed together in an incubator in the hospital, newborn twins grow faster and are better able to regulate their breathing. They have also observed that the weaker twin seems to benefit from sleeping beside the stronger twin. 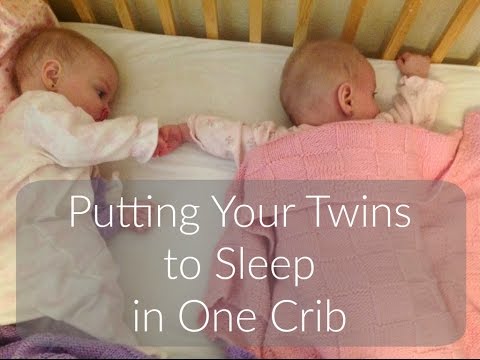 However, some doctors advise against co-bedding, saying that it increases the risk of accidental suffocation, overheating, and crib death. If you do choose to have your twins share a crib, know that you can only do so in the early months when they’re still tightly swaddled and are unable to move around much.

When they start wiggling and risk rolling onto or bumping each other, you’ll have to move them into separate cribs.

When it comes to newborn twins sleeping arrangements, the choice is ultimately yours. But please do make sure that you have thoroughly researched all your options, including the risks involved. Good luck!

Facebook
Twitter
Pinterest
Previous articleChances Of Twins After Miscarriage: What Are They?
Next articleSigns Of Preterm Labor With Twins
TwinStuff
TwinStuff.com is the #1 Interweb Resource and continually growing Interactive Community for Parents of Twins and Multiples. Twinstuff.com began in 1998 as a forum for discussion on all things twins. Over the years, it has grown substantially and evolved into the ultimate resource and engaged community for twins, multiples and parents of twin & multiples.