When Do You Start Showing with Twins? 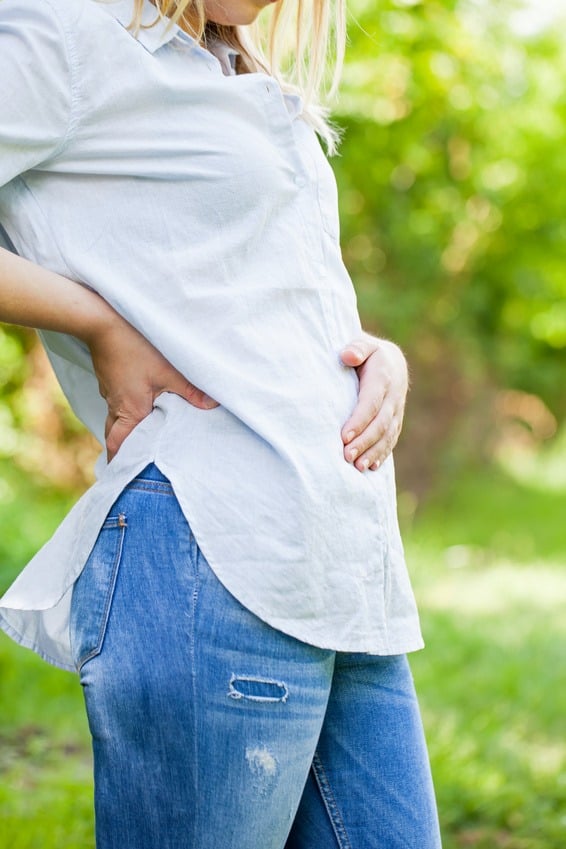 We’ve all heard stories of women who made it almost all the way through their pregnancy without realising it, only to find out in a shocking moment that they’re going to be a mom! But with twins? This aint gonna happen!

Not only do twins normally show earlier, but they’re going to make themselves known all the way through your pregnancy! So, when do you start showing with twins?

When does pregnancy start to show with twins?

I suppose she just wants to keep us guessing!

One thing that is certain is that twins will make themselves known a whole lot sooner than would be normal in a pregnancy.

In fact, this is one of the biggest signs that you might be having twins. Being far bigger and seeming to be further along that you really are.

It’s one of the things that makes moms to be realise they might actually be carrying a pair of little twinnies, whether it’s just a personal feeling or a friend or family member making a comment about how big they are.

Now, like we just said, every woman is different, but we’ve heard stories of women who started showing as early as 6 weeks in!

Obviously this isn’t every person’s experience, but considering that most single pregnancies only start to show at around the 12th to 16th week, you can understand how incredible this is, and how different a twin pregnancy is to a singleton.

This happens because your body knows that it’s pregnant with twins, and it’s already started to make the necessary accommodations to hold twin embryos.

Your uterus is going to be stretching far more than it would with a standard pregnancy, and this can sometimes cause uterine cramps that can be far more severe than normal. So if you’re experiencing a lot of uterine cramping, especially early on in your pregnancy, that could be a sign of twins!

There’s no standard time to start showing with twins, but it’s almost always going to be earlier than it would if you were only carrying one child, so just bear that in mind.

It’s actually pretty normal for women carrying twins to seem a few months further along than they actually are, especially later on in their pregnancy.

You’re also likely to show earlier if you’ve been pregnant before, because the uterus and other muscles around your pelvis that have to stretch and change during your pregnancy will be more used to what’s happening, so it takes less time for them to adapt.

You’ve also got to consider that the hormone differences that happen as you go through your pregnancy happen in far greater concentrations when you’re pregnant, and one of the symptoms of this is increased weight gain and water retention.

Now, I’m not here to say that you’re going to balloon up because you’re carrying twins. Only that it’s likely.

Sorry girls, but the dream of being a yummy mommy are gonna have to be put on hold whilst you’re carrying your twins. It’s just not going to happen, with everything that’s going on.

On the upside, there’s multiple ways to deal with this, and luckily for you, we’ve got an article on just this matter, so if you’re interested in regaining your belly after you have your little treasures, and you want to do what you can to avoid the threat of twin skin, you should check out this article.

When Do You Start Showing with Twins: Wrapping Up

Like we’ve said all along, every pregnancy is different. But because you’ve been blessed with twins, you’re going to have to face the sort of thing most moms pregnant with twins do.

On the upside, you’ve come to the right place. Here at Twinstuff, we’ve got all the resources you need for any situation you’re going to face during your pregnancy, and for years after.

When did you start showing? How did that affect your life, and how did you deal with it? If you’ve got any tips for newly pregnant women who have twins, be sure to let us know in the comments!

Facebook
Twitter
Pinterest
Previous articleTwin Skin: How to Heal Your Belly After Twins
Next articleBest Baby Toothbrush: Dental Hygiene from the Get Go
TwinStuff
TwinStuff.com is the #1 Interweb Resource and continually growing Interactive Community for Parents of Twins and Multiples. Twinstuff.com began in 1998 as a forum for discussion on all things twins. Over the years, it has grown substantially and evolved into the ultimate resource and engaged community for twins, multiples and parents of twin & multiples.