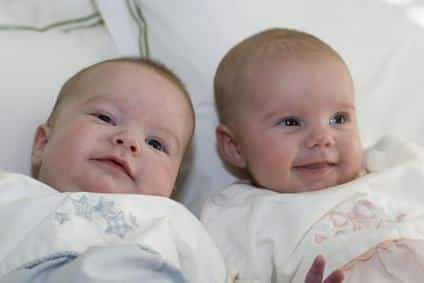 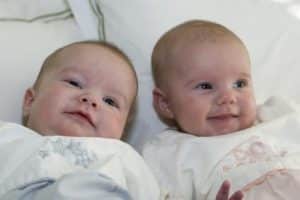 After all, fraternal twins are very different from identical twins, in both the way they’re formed and what happens afterward. But if you’re going to have twins, it’s good to know as much as possible.

What’s the Difference Between Fraternal and Identical Twins?

Fraternal twins occur when a woman releases two eggs as part of her monthly cycle, and they both get fertilised by two different sperm. This means the genetic code that will eventually become your babies is different for both of them.

Identical twins happen when one egg gets fertilised by one sperm, which then splits a few days after conception, which means their bodies have the same source of genetic information so they’re going to be very similar.

Because fraternal twins come from different eggs and different sperm, they only share around 50% of their DNA with each other, rather than the 100% of DNA that identical twins share because they come from the same egg that splits after conception.

This is important, because it’s the reason why fraternal twins can look different, and identical twins look the same.

So What Causes Fraternal Twins to Look Alike?

The same thing that causes brothers and sisters to look similar. The fact that their genes all comes from the same place.

Everything about us is formed from our chromosomes and DNA. This is what controls how we look, how tall we are, the color of our eyes, hair, and so on.

Because your twins come from the same parents, their DNA is going to be very similar, which means that they’re probably going to resemble each other in some way, the same way that you can see similarities in a lot of siblings.

It is possible for fraternal twins to have identical chromosome profiles, which is almost like being identical twins, and this leads to them looking incredibly similar.

This is entirely down to chance, and happens because mom and dad only have 46 chromosomes in 23 pairs, and luck can have it that both eggs and both sperm that form your twins just happened to carry the same sets of chromosomes from each parent.

Even if your fraternal twins don’t share that many chromosomes, they can still look alike because they were born at the same time and age at the same rate, so it’s natural for them to resemble each other.

This is especially likely if your family has particularly dominant genetic traits, for example, dark hair is a dominant gene and red hair isn’t, so if you’re dark haired, don’t carry a recessive red head gene, and your partner is a ginger, it’s likely that both of your children will have dark hair.

How Can You Tell If Your Twins Are Identical?

The most accurate way is with a DNA test. If your twins share all of their DNA, then they’re completely identical. Your doctor can easily set you up with one of these, if you want to be sure what sort of twins you have.

Your doctor should also have a fair idea of your twin zygosity, or what type of twins you have, when they’re delivered by examining your placenta. But this isn’t always 100%, because there are rare cases that can change this.

This is really unlikely, but happens when two sperm fertilise the same egg, which then splits like normal identical twins.

Because they’re not completely identical, your twins will look similar, but not exactly the same, so if you’ve got fraternal twins who look so close, but not quite, identical, then they might be semi identical!

So, Do Fraternal Twins Look Alike?

Well, they can, but they don’t have to. But whether your twins look alike or not, you should count yourself lucky.

After all, you’ve been blessed to have twins, a privilege that most mothers are never lucky enough to experience. So take full advantage and give your twins as much love and affection as you can!

Have you got twins that aren’t identical, but they look so similar that they probably should be? Or maybe your twins are identical, but act so differently you wonder how that happened?

We love hearing your stories, so don’t forget to join our online community before you go, where you can leave a story and ask questions.

Facebook
Twitter
Pinterest
Previous articleCan Fraternal Twins Share a Placenta?
Next articleBest Baby Food Maker of 2018
TwinStuff
TwinStuff.com is the #1 Interweb Resource and continually growing Interactive Community for Parents of Twins and Multiples. Twinstuff.com began in 1998 as a forum for discussion on all things twins. Over the years, it has grown substantially and evolved into the ultimate resource and engaged community for twins, multiples and parents of twin & multiples.