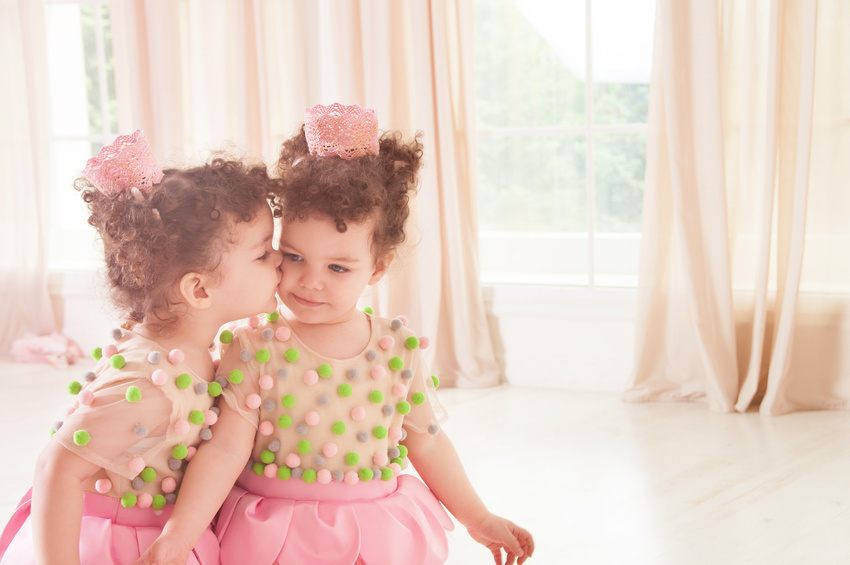 Twins are getting more and more common, with the rate of multiple births getting higher and higher. In fact, in 2001 the amount of twin births raised to more than 3% for the first time in history!

Most people think there are only two different types of twins, but did you know there are actually seven?

There’s a lot of reasons why twin births are occurring far more regularly. There’s the fact that women are having children older that they used to, which can increase the chances more than one egg will be released into the womb at a time.

There’s the advent of assisted reproductive techniques, which can cause the ovaries to produce more than one egg per cycle.

Previous pregnancies can increase your chance of conceiving twins, and finally there’s also heavy genetic and racial components to having twins. In fact, certain tribes in Africa have as much as a 1 in 20 chance of having twins! So What Are the Different Types of Twins?

When it comes to twins, there are two ‘standard’ types, and a whole bunch of rarer occurrences that crop up every now and then.

Most of these are occasional events, but some are so rare that you’ve probably never heard of it, let alone going to have this type of twin!

This is one of the ‘normal’ types of twin that people think about when you say twin. It’s caused when two eggs are released and manage to both be fertilized by separate sperm at the same time.

Because both children come from different eggs, they’re non-identical twins, and they’re going to be as different as any two brothers or sisters usually are.

This means they can look completely different, act different, and be different in any conceivable way that any two normal siblings could be.

The chance of fraternal twins is actually genetic. Some families are far more likely to have twins than others. It’s passed down by an individual gene that the mother holds, so if a few people in your family have fraternal twins, it might not be just down to chance!

Out of all the types of twins, this is what people normally think of when you say twin. Two children with 100% the same genetics, both born from the same egg.

A pair of twins born recently in England are genetically identical, but one has blue eyes and pale skin, and one is darker skinned with brown eyes!

Identical twins also don’t have to have the same sort of personality. It’s a common misconception that twins are identical in every way. But any mother of identical twins will tell you that, even though they look completely alike, they can be as different as chalk and cheese!

Identical twinning happens when one egg is fertilized, then splits into two during the first few days of pregnancy.

As of yet, no one knows what causes the egg to split this way, but considering that twins are getting far more frequent, and the science of twins is understood more every year, it could only be a few years until we know exactly what causes twins!

This is a type of identical twin where the egg splits, the same as it normally does, but far later in the fertilization process. Around one quarter of identical twins are mirror image twin﻿s.

A mirror image twin is exactly what the name says. Both twins are like reflections of each other, to the point that they will even favor different hands for writing and sports!

Mirror image twins have exactly the same DNA, and usually have identical or incredibly similar fingerprints.

Sometimes one of the twins even has situs inversus, a harmless but strange disorder where the internal organs are on the other side of the body from where they normally are!

So yeah, if you’ve ever had an urge to recreate Freaky Friday with your own family, mirror image twins are where it’s at.

This can also called polar body twinning. This is caused when an egg splits before fertilization occurs, and then each egg goes on to be fertilized by a different sperm.

Because of this, the twins share all of their mother’s genes, but only half of their father’s, so share 75% of their DNA.

This is a rare occurrence when a pregnant woman falls pregnant again!

This can happen, but it’s incredibly unlikely. It’s literally caused when a woman falls pregnant on one menstrual cycle, then has another menstrual cycle, and the second egg is also inseminated in a separate instance of intercourse, weeks apart.

This is an even rarer occurrence when a woman releases two eggs during her cycle and has more than one lover, and each egg is fertilized by sperm from a different father.

Because they share the same mother but two fathers, this literally means you are pregnant with twins who are also half siblings, and they’re growing together in the same womb!

This is possibly the rarest type of twin possible, with less than 25 recorded cases worldwide.

It’s the result of the fusion of two eggs, which were fertilized by two different sperm. This produces individuals with different sets of chromosomes.

Some of the people born this way even have multiple blood types, or potentially even both male and female chromosomes!

What Does This Mean for You?

It doesn’t really matter which of the twin types you have. Just consider yourself blessed to be born with two beautiful babies rather than just one.

As long as your children are healthy and happy, nothing else matters. And if you’re interested in having twins, whilst there’s a few ways you can increase your chances, you’re better off just trying to conceive naturally and hoping you get lucky!

Which types of twins do you guys have? Have you noticed any quirks or peculiarities with your twin bundles of joy?

We’d love to hear all your twin stories, so let us know in the comments below or join our community and post your story there!

Facebook
Twitter
Pinterest
Previous articleMirror Twins: Causes, and What It Means for Your Family
Next articleTimeless Baby Shower Games for Twins
TwinStuff
TwinStuff.com is the #1 Interweb Resource and continually growing Interactive Community for Parents of Twins and Multiples. Twinstuff.com began in 1998 as a forum for discussion on all things twins. Over the years, it has grown substantially and evolved into the ultimate resource and engaged community for twins, multiples and parents of twin & multiples.